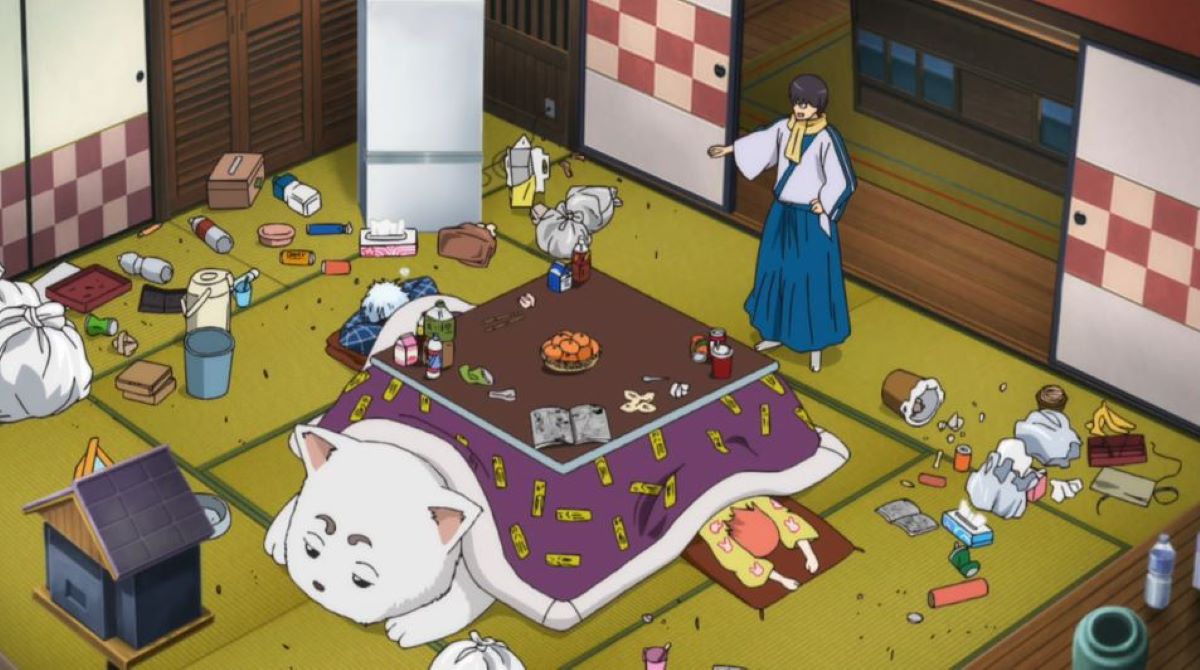 The seasons are very distinct in Japan, and you may have noticed a lot of seasonal themes in anime. There are many particular things that you will notice in winter anime episodes, here are a few.

What could be better than spending a winter night in Japan than sitting under a comfy blanket at a heated Kotatsu table? Kotatsu are low tables with a heater in the center covered with a futon and are commonplace throughout Japan.

On cold nights families gather to eat, play games, watch TV, and stay nice and toasty. Traditional Japanese clothing is especially suited for this form of space heating, as warm air flows through the folds of the kimono around the neck and arms.

A fantastically warming winter dish. Japanese hot pot (nabemono) is a home-made stew and is a popular cold weather recipe, it’s also a great communal meal. Various ingredients can be used depending on tradition, availability and taste, such as various meats or seafood, mushrooms, tofu and vegetables.

The ingredients are usually prepared then laid out raw on serving plates, and put into the bubbling broth at table, so great for a party or a lovely family gathering. It’s also great to eat on a kotatsu.

The north of Japan, especially Hokkaido, gets a lot of snow every winter. There are many ski resorts, and Sapporo holds an annual snow festival with snow statutes and ice sculptures. The snow is also of the powered variety which is perfect for winter sports.

The more southern areas of Japan get very little or no snow, with Tokyo usually getting some snowfall each winter but it tends to melt quickly. But with the great transportation system in Japan, many people travel to the north for the snow each year.

What better way to warm you up than relaxing in a hot spring? Bathing, and communal bathing, are really important to the Japanese, and natural hot springs abound. The amazing feeling of being in the warm water while the air around is cold, or it’s even snowing is wonderful.

Many hot springs are also in mountain areas, so you can enjoy a spectacular winter view while you relax.

Colds are a big deal in anime. At some point, someone is likely to get caught in the rain or fall asleep in an inappropriate place, and suddenly have a fever. With the high population density, people are wary of spreading disease, and there is a tradition of a high standard of hygiene in an effort to prevent this.

Mask wearing has also been common for a long time, as soon as someone feels slightly unwell, they put a mask on. With the culture of working hard, colds can also be a massive disruption.

It is not certain when citrus cultivation began in Japan, but it is almost certainly one of the oldest types of fruits grown domestically. Yuzu, an asian hybrid citrus fruit is very popular as it is relatively hardy and frost-resistant.

Although generally not eaten, the juice and zest are used in many dishes. Whole yuzu are also placed in baths, especially around the winter solstice, with the fragrant oils being released into the water.

The mikan, a sort of easy-peeling, sweet and mostly seedless type of satsuma is also very popular. They are also eaten in winter a lot as the vitamin C content is thought to ward off colds.