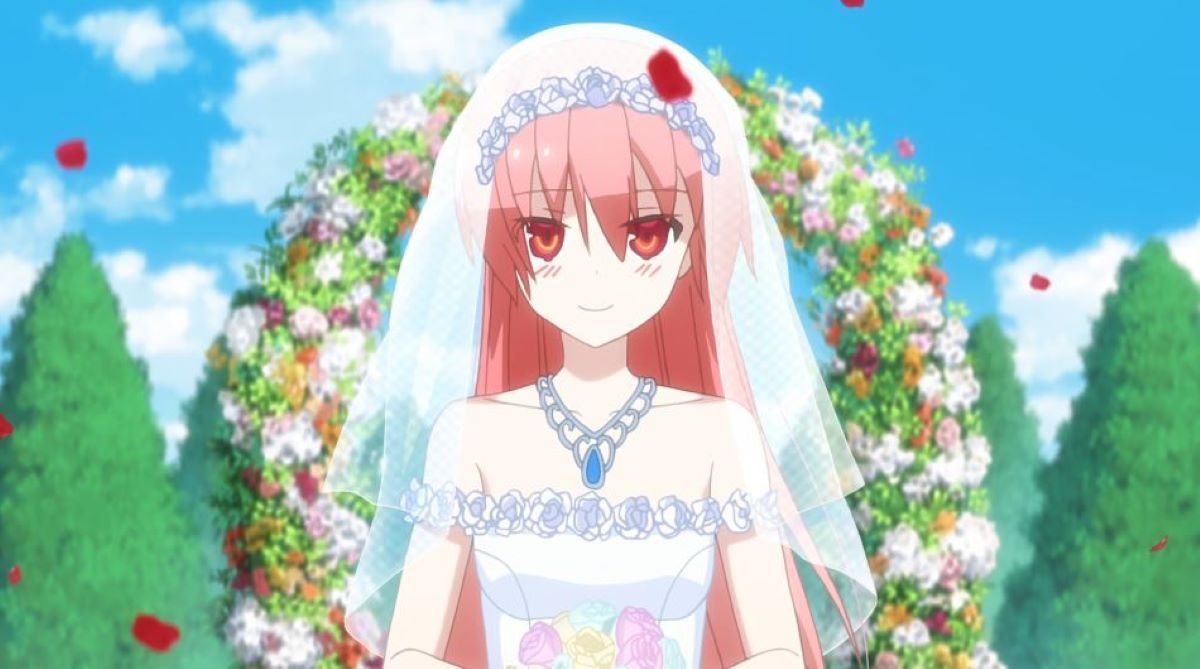 With the premiere of TONIKAWA: Over the Moon for You a few weeks ago, many viewers may have been wondering about weddings in Japan.

The promotional images and introduction sequence are full of white wedding dresses, Christian churches and themes connected to a Western wedding ceremony.

But the couple marry simply by filling in a form and filing it at the ward office, completing the paperwork late in the evening without their parents present. So what do you need to do to get married in Japan?

Traditional Japanese weddings are celebrated by wearing beautiful kimonos and following a procession led by a Kannushi (Shinto priest). The groom wears a black kimono, and the bride wears a white wedding kimono called a uchikake with a large white headdress, which symbolizes submission.

The couple and the wedding party of close family and friends will go to a shrine where the priest will perform the wedding ceremony. The priest begins with prayers, then the couple is purified. The groom gives an oath and then the couple each takes three sips from a small, medium and large cup of sake, making nine sips in total each.

Symbolic offerings are then given to the gods to end the ceremony. Sometimes Western traditions can be mixed into the tradition ceremony, such as the exchanging of rings.

These types of weddings currently account for around a quarter of all wedding ceremonies in Japan, and the numbers have been falling. But they are unlikely to disappear as many of the bigger shrines offer wedding photography experiences, which are extremely popular.

Couples are dressed in the traditional kimonos and have their photos taken and enjoy the atmosphere of a Shinto wedding.

Western-style weddings are usually more expensive and elaborate than traditional wedding ceremonies in Japan. Several elements of a Christian wedding may be incorporated into a Japanese wedding, even if the couple is not Christian.

The ceremony can take place in a church or separate wedding chapel, and as less than 1% of the Japanese population is Christian, a ‘Christian-style’ wedding is often more of a stylistic statement than a religious one.

As a Western-style wedding is less formal than the traditional Japanese wedding, which is generally very solemn, the bride and groom can be more creative and personalise their wedding service.

Outfits can vary, white wedding gowns are popular and several can be worn during the course of the festivities, with changes worked into the schedule. Guests can wear a mix of suits and dresses or formal kimonos.

To legally marry, couples need to file a marriage registration at the local ward office. They need to do this whatever type of ceremony they choose to have, or indeed they needn’t have any ceremony at all. Divorce, if both parties agree, is also a simple form. So what we see in TONIKAWA is fairly realistic, they show their family registers, and use their seal to prove their identity before filing at the ward office.

Tsukasa is underage so needs her guardians permission to marry, but this is given in written form, they don’t need to be present. Currently, brides can marry at 16 and grooms at 18 with their parents permission, as the age of full adulthood is 20. But this is due to change in 2022, with a bill lowering the age of adulthood to 18. This law will also raise the age a woman can marry to 18, as Japan has come under pressure to enact more gender equality.

There are plenty of ways to celebrate a marriage in Japan, be it religious or not. If you wish to know more this video is very informative about the legal process and the different kinds of ceremonies.