We Love This Super Realistic Attack on Titan Cosplay 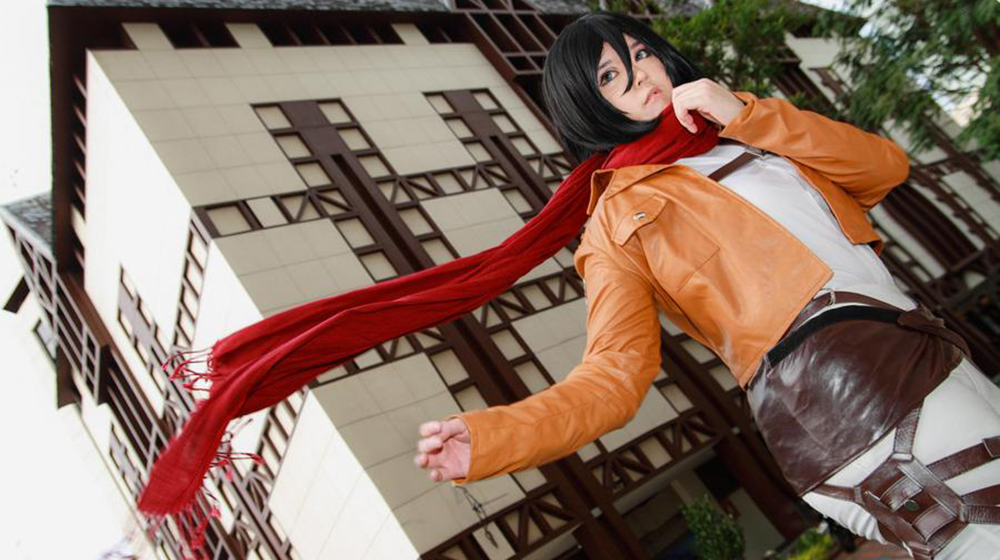 When it comes to cosplay, it isn’t difficult to find a uniform from eBay or Amazon. However, pulling off the character’s hairstyle and appearance is a different story. Have a look at these Attack on Titan cosplays--you will surely be thrilled by their super realistic looks!

Check Out These Super Realistic Attacks on Titan Cosplays:

The character’s physical characteristics are well-displayed in this rendition by Cutsceneaddict: short, straight black hair tucked in an undercut layer, and narrow, dauntingly-dull, gray, puffy eyes.

Levi’s physique is affected by extensive usage of vertical maneuvering equipment. Cutsceneaddict gracefully handles Levi’s short, yet muscular, appearance. Levi can usually be seen frowning or emotionless due to his loss of sleep. This, plus his extremely calm manner, makes him ambiguous for anyone trying to “get inside” his head. The American cosplayer perfectly portrays Levi with these characteristics above, and her handmade foam wings add some uniqueness to this fantastic Attack on Titan cosplay.

A young, petite woman, and the smallest soldier of the Survey Corps, Christa/Historia has stolen the hearts of many boys in Attack on Titan.

Her cuteness and angelic pose surely adds to the illusion that this Attack on Titan cosplay is truly reminiscent of Christa/Historia in real life!

Jesuke does a beautiful job with this Attack on Titan cosplay. Her charming chin-length black wig with parted bangs, fair skin, and keen gray eyes contribute to a stunning pose as she holds titan-slicing blades with the classic red scarf around her neck.

The Survey Corps uniform of Mikasa is executed flawlessly: she has realistic maneuvering gear horizontally mounted at her hips, the Survey Corps symbol on her chest, support rods for the gas canister and guns, and belts attaching different gears. The photo captures an all-around accuracy in this Attack on Titan cosplay of Mikasa Ackerman, one of the two Asian characters portrayed in this entire Japanese series (so far).

Old man Pixis is one of the eldest in either the military or commander ranks with a love for drinking. He is agile enough to survive the titan’s attack despite being drunk half the time. It’s only once in a blue moon that we can find a cosplayer around the actual age of the character they’re portraying, especially older characters like Dot Pixis!

Much like his counterparts, Hange Zoë and Nile Dok, we only see Pixis wearing the Garrison jacket and white button-up shirt worn by high-ranking Garrison officers. From the bolo tie to the realistic wrinkles, the distinguished mustache under his eyes and light skin, the cheeky smile as he’s holding a bottle of booze, this portrayal is definitely the spitting image of Dot Pixis.

The identity of the model is mentioned solely as “father of a cosplayer,” but the Russian photographer Mokrushina managed to shoot a fantastic picture of this realistic Dot Pixis Attack on Titan cosplay.

As a commander, Erwin Smith bears a commanding presence. His height is above most members of the Survey Corps. The tranquillity on his face and blue ocean eyes cast a cold, icy look upon others.

The look, the hair, eye color, crazy-thick and bushy eyebrows, and even the nose featured in this Attack on Titan cosplay perfectly match the anime character. Photographer Kmitenkova manages to capture and edit this photo with an elegant accuracy. It’s difficult to recreate a character features and maintain an attractive look at the same time. There is no doubt that Russian cosplayer Oleg Kot has done a fantastic job of cosplaying the star-crossed commander of the Survey Corps.

Some anime is so good that it makes you forget the voices of the characters are just actors! Some actors even do voices for more than one show. In this article, we’ll look at 19 famous anime voice actors in that group.