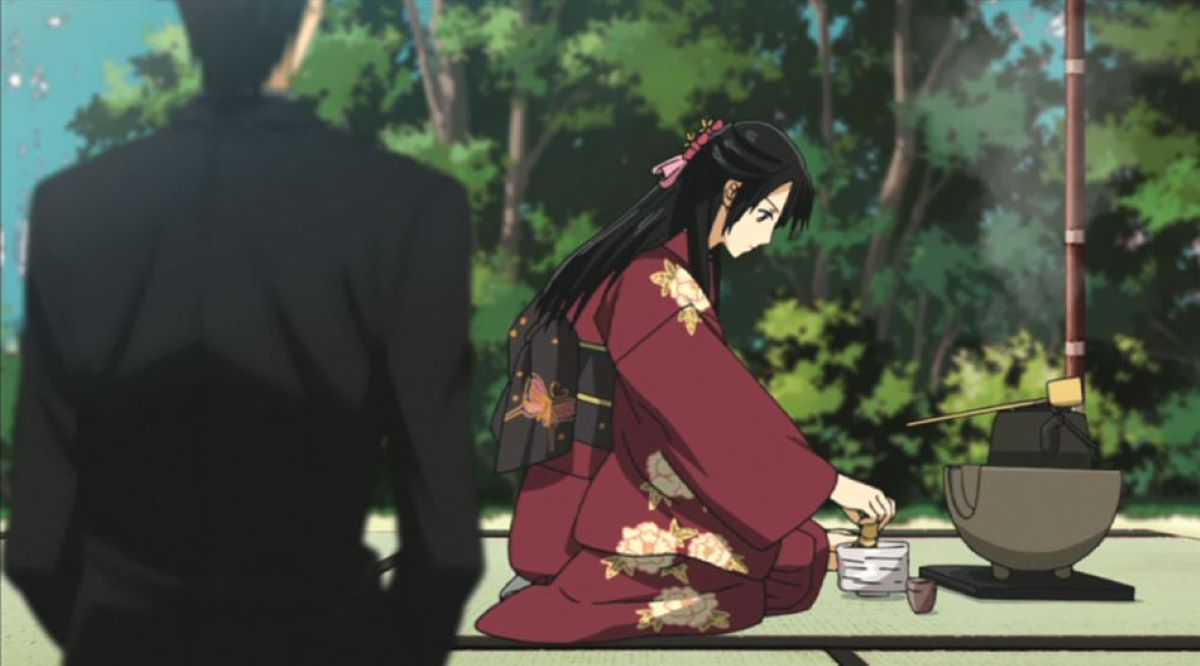 The tea ceremony is called Sado, which literally translates to ‘the way of tea’. Every movement is coordinated, and meant to exude beauty.

The Japanese philosophy of wabi-sabi is reflected in the tea ceremony, this is appreciation of the natural and imperfect. Bowls and utensils are kept simple, or are even intentionally dented.

Tea houses have simple decoration and guests and the host sit seiza style (kneeling with feet flat on the floor and resting the bottom on the heels) on plain tatami mats.

The preparation of the room, the clothing worn and the rest of the atmospheric conditions are considered and composed carefully to enhance the ceremony.

It is thought tea came to Japan through Buddhism from China. To help keep monks awake for longer bouts of meditation, they often drank tea to sustain themselves. Tea was then utilized in monasteries as part of ceremonies, and then taken on by the elite and fashionable classes of Japanese society.

Tea parties were sometimes unruly and included games to start with, but this was changed in the 15th century, returning to the precise and ritualistic nature of the ceremony with the aim of creating a refined and subdued atmosphere. There is an old Japanese saying that encapsulates the tea ceremony ‘Zen and tea have the same flavour’.

The tea ceremony is considered one of the three classical arts, along with incense appreciation (Kōdō) and flower arranging (Kado). These three arts are taught in specialised classes or as clubs at schools with highly trained teachers. Many schools in anime have a tea club, in You and Me, Shun and Yuta are in the tea club.

In YuruYuri we see the Amusement Club using the tea ceremony club room, which has since been disbanded but all the equipment and decorations are intact. Holmes of Kyoto gives us a glimpse of some of the other classical arts, namely Kado lessons, with young women being taught flower arranging alongside their university classes (the flower arrangements pictured above).

Medical students often study the tea ceremony, to enhance the intentions and grace of their physical movements. Tourists can not only take part in tea ceremonies but also take lessons, but the way of tea takes a lifetime to perfect.

The exact sequence differs between schools and teachers, but the ceremony generally follows a particular order. The hosts put the matcha powder in the bowl and then ladles in the hot water.

They then stir with the whisk. The host places the bowl down and the guest bows before taking it. The guest rotates the bowl three times clockwise with the right hand before drinking. The guest wipes the bowl with their right hand where their lips touched, then they rotate it counterclockwise and return it.

The guest must also follow other tea ceremony etiquette, including wearing formal attire, complimenting the single blossom and hanging scroll used to decorate the room, and remaining silent during the preparation stages.

Tea houses can be situated in a tea garden. Built to emphasise natural beauty and produce a calming atmosphere, with winding stone paths, traditional stone lanterns and gentle water features.

The ideas of wabi-sabi are reflected in the simple planting, using mosses and ferns and sometimes Japanese maple trees. The school tea house in YuruYuri is set in a beautiful tea garden.

If you wish to visit a tea garden and can’t make it to Japan, there is a famous tea garden in Golden Gate Park in San Francisco (pictured) and Kew Gardens in London contains a small example.

In this blog, we will count down our top 4 favorites that...