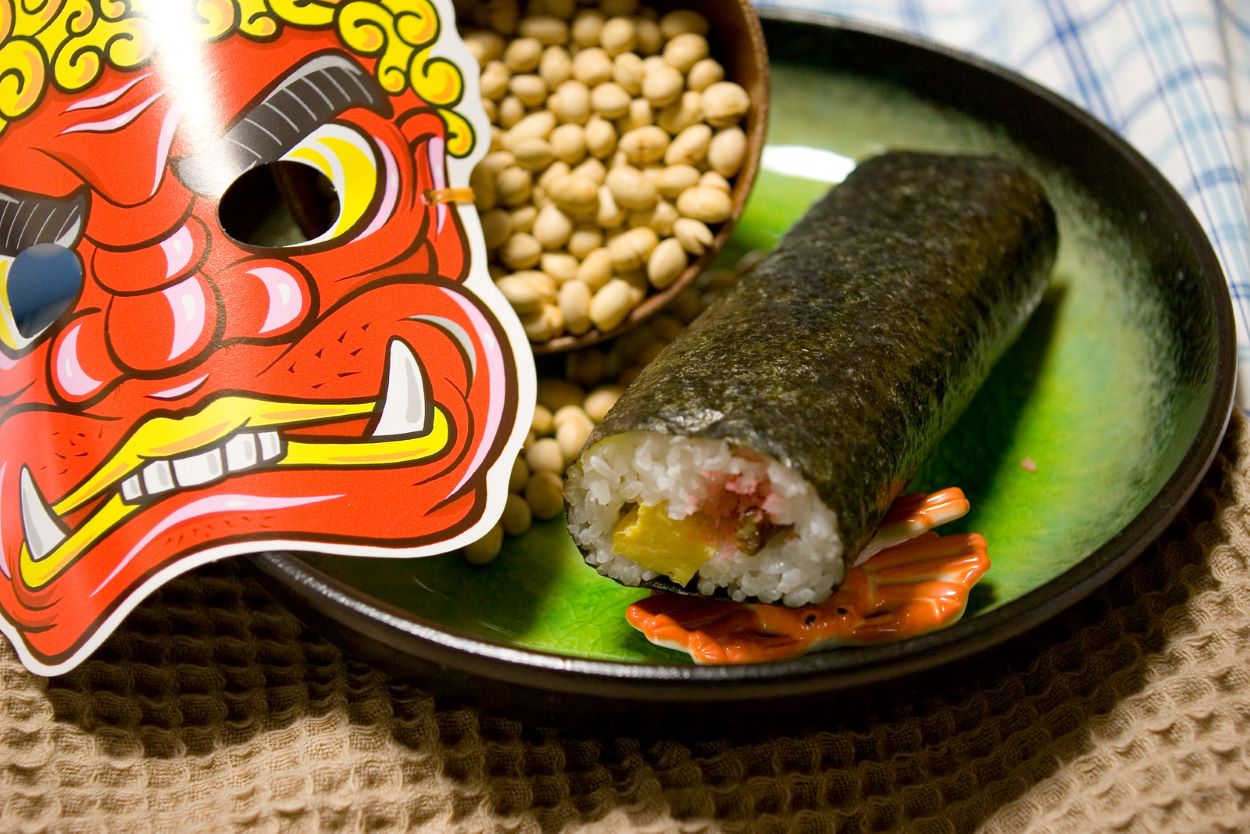 Even though it may not feel like it, Japan is preparing for the start of spring. Setsubun means ‘seasonal division’ and in this case, means the change from winter to spring and is celebrated at the beginning of February, on the last day of the year according to the old lunar calendar. This is now generally celebrated on February 3rd. There are many ways it is celebrated across the country, let’s look at some of them.

Setsubun is generally all about ritual cleansing, and gaining good luck for the coming year. A big part of this is bean throwing, either roasted soybeans or peanuts. Bean-throwing is a ritual performed to bring good luck and drive away the evil spirits that lurk in the dark and cold winter months.

There is also a ritual where arrows are fired into the air to ward off the evil spirit.

There is an ancient tradition in Kansai, and people throw roasted soybeans at someone wearing an oni (traditional Japanese ogre) mask while shouting ‘oni wa soto, fuku wa uchi!’ which translates to ‘devils out, fortune in!’ or the beans can be thrown at an effigy or picture of an oni.

Sometimes an adult will dress up so the children can chant and throw beans at them. This ritual is called Mamemaki, and is practiced at the crossroads of the season, as this is the time evil spirits are believed to roam.

Beans can also be placed on the family altar, or can be eaten for good luck. Some think you need to eat the same number of beans as your age, or often one extra added for luck for the new year.

Many shrines and temples organize Setsubun events where you can often see full-grown demons running around and throwing beans and sweets. While many local traditions are mostly family and home based, there are temples and other sites where public Mamemaki events are held.

Setsubun is also important for geisha communities, performing dances at shrines or putting on special events for their clients, such as role reversal and cross-dressing, as the change of seasons is seen as a day set apart from the rest of the year.

Eating ehomaki is a regional variation on a setsubun activity, originally from Osaka, but it is now becoming popular across the country, convenience store chains even promoting the sushi rolls as a special seasonal item.

Ehomaki is a large sushi roll, and the whole roll should be eaten in silence while making a wish, and it is said that eating it while facing or turning it in the happy direction (this changes every year according to the astrological inputs) will bring happiness for the coming year.

The division of the seasons offers an opportunity for a new beginning, and Japan is full of traditions. Setsubun is an important period in the calendar, bringing the beginning of a new year and the chance to welcome the spring of life.

Special ceremonies and purification rites are held to rid the evil of previous years and drive away diseases from being introduced into the new year, and also provide an opportunity to spend fun time with loved ones.

Christmas is fast approaching, time to relax and enjoy some Christmas themed anime! Take your pick from this varied list.