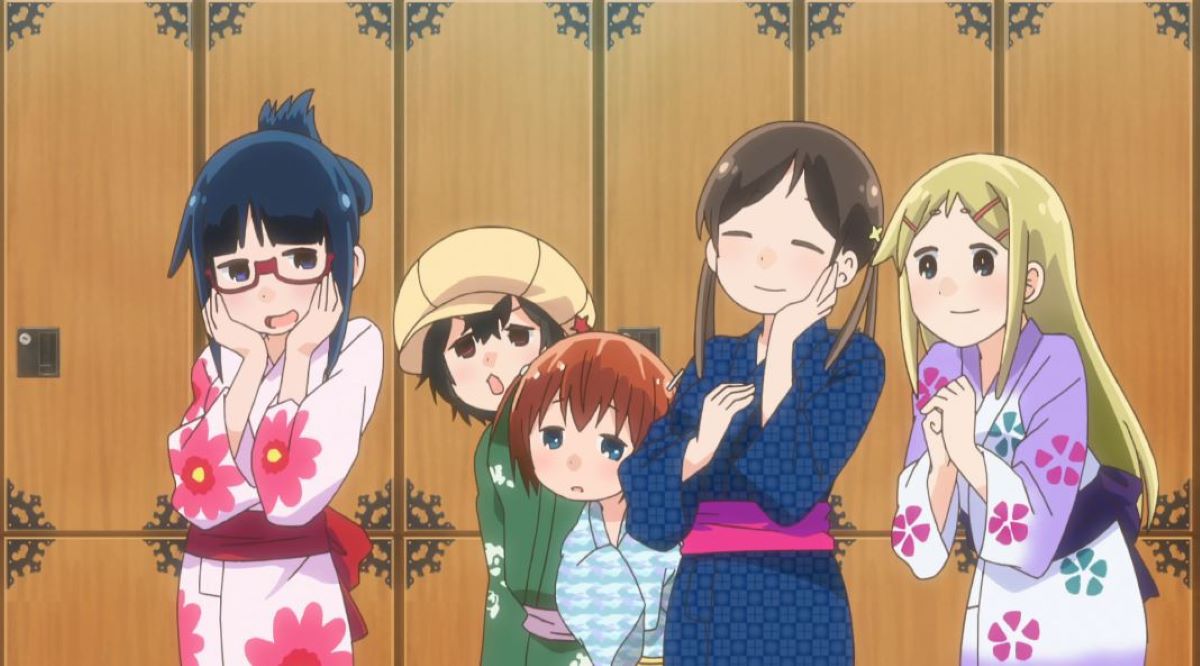 As Japan’s traditional and national dress, yukata, kimono, and hakama appear in anime a fair amount. But what are they, and what are the differences between them?

The most easily recognizable garment of traditional Japanese clothing is the kimono. Literally translating as ‘a thing to wear’, it was the main piece of clothing for centuries of Japan’s history. It is thought the earliest kimonos were influenced by the style of dress worn by Chinese envoys around 400AD.

This style became very popular with the Japanese Imperial Court and was cemented during the missions to Tang China. These envoys were an attempt to learn from Chinese culture and civilization and prompted an extensive cultural exchange between the two countries.

Kimonos are made from a single bolt of cloth. For men, they tend to be undecorated and in muted colors, whereas, for women, they can be a range of pastel or bright colors and with fine patterns. They are made from thick fabric, often silk, and over an under-kimono as they are designed to be worn all year.

Uchikake - a formal kimono worn by brides for traditional wedding ceremonies. Often heavily decorated and padded, with red as a prominent color. Not worn with an obi, and they tend to trail on the floor. There’s also shiromuku, a pure white bridal kimono.

Furisode - a kimono with long hanging sleeves. Used to be only for unmarried women, they now tend only to be worn at coming of age ceremonies and are usually decorated with bright colors and patterns to symbolize youth.

Iromuji - undecorated and usually monochrome kimono worn at tea ceremonies. As the ceremony is kept simple and peaceful, the kimono worn are also kept minimalistic.

Mofuku - these are kimono and various accessories that are suitable for mourning. Plain and in black and white, they are worn by both men and women.

Jūnihitoe - a layered kimono worn by the imperial household and court. There are many fine examples in museums and are still used for important functions such as a coronation.

There are, of course, many more types of kimono, but these are the types most likely to be seen by the average otaku.

There are a whole range of accessories that accompany kimono. There are various headdresses for formal occasions, especially for weddings. Kimono are always worn with tabi socks, white socks with a divided toe so that they can be worn with zōri, thonged sandals.

The kimono is tied with an obi. This can vary from a simple thin belt to enormously elaborate designs that need another person to tie it for the wearer. As formal obi are made from silk and are highly crafted, they are often more expensive than the kimono itself.

The kimono can be tied with a series of knots beneath the obi rather than held together with the obi itself. Pre-tied obi can now be purchased.

For women, if their hair is long enough, it is generally worn up when wearing a kimono to expose the nape of the neck. Hair ornaments are also sometimes worn to accentuate the design of the kimono.

Yukata are an informal summer garment made from cotton (or sometimes synthetic fabrics) and worn over bare skin. As they are less thick, they are a lot less expensive. They come in a range of fun designs and are worn to summer festivals or while at a public bathhouse.

They were initially used as robes, and the word yukata even means ‘bathing cloth’. They are worn with zōri but not with tabi socks.

Hakama refers to the baggy garment worn over a kimono for formal occasions. These can be divided (akin to trousers) or undivided, but the hakama’s overall look remains the same. They are worn for traditional Japanese sports such as kendo and archery and for queen and king matches of the Japanese card game karuta.

Formal black hakama are also worn by the groom and esteemed guests as part of the wedding ensemble in a Shinto wedding ceremony and can also be worn by young men to their coming of age ceremony.

This has been a quick guide to traditional Japanese clothing, which should help with confusion when watching anime!