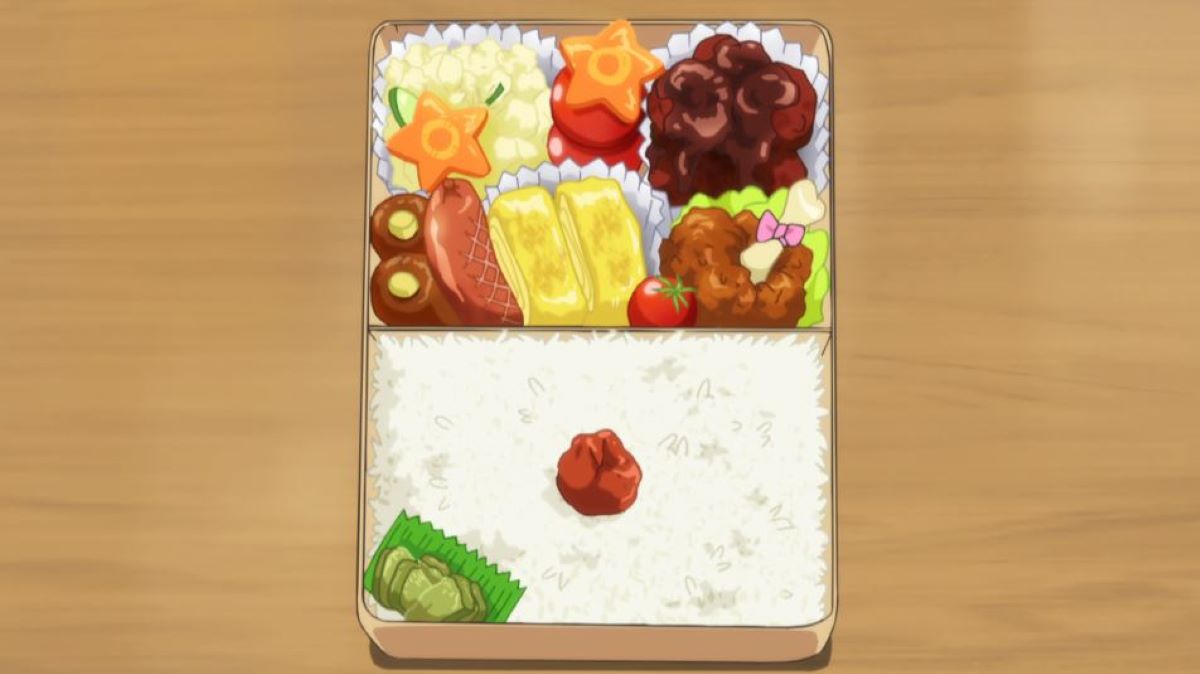 A bento is a single-portion meal, often packed at home and taken for lunch to work, school or a journey.

They can also be purchased from many places in Japan and come in a wide variety of contents and prices, simple ones can be found at convenience stores and department stores often make a pricey signature bento.

Contents vary widely but they usually contain rice, or occasionally noodles, with meat or fish and various vegetables. They can be made to look cute, or even to look like a certain character.

Sometimes the most delicious things come from the most surprising of places. In Elegant Yokai Apartment Life, Inaba finds a bento in his bag while looking for his wallet. It was made by the faithful cook of his apartment building Ruriko-san.

But Ruriko-san is a ghost, like many of the residents of the Kotobuki-so, so Inaba finds it quite difficult to explain who has made him the bento. This raises the suspicions of various members of his class, as they know he lives in an apartment and not with his family.

Ruriko-san dreamed of owning a restaurant in life, and has fulfilled her dream by being the chef for the yokai apartments, specialising in delicious Japanese home cooking.

Generally young children take a bento to school made by a member of their family, usually mum. In Sweetness and Lightning, Kohei is starting to learn to cook after the death of his wife.

He is managing to make lunch for his daughter Tsumogi to take to kindergarten, even though he doesn’t manage to produce much variety, but all her other meals are bought from the convenience store.

He enlists the help of his student Kotori whose mother owns a restaurant. Slowly they make different dishes and gain confidence in cooking. Convenience store bentos come in a wide variety and can be bought cheaply.

Bento for your Love?

In Toradora! we see the intimate everyday lives of two high schoolers. Ryuji is an excellent cook, and soon becomes worried about the eating habits of his neighbour Taiga, who lives alone and mostly eats food from the convenience store. It doesn’t take long before he’s making all her meals, including her lunches.

This presents something of a problem at school, when their classmates start to notice they always have the same lunch. There has already been rumours concerning their close relationship, and making lunch for someone is often seen as the prerogative of a loved one. Ryuji even gets very excited at the prospect of making a bento for his crush, Minori.

In Wolf Girl and Black Prince we see another example of homemade lunch symbolising feelings for someone. Kamiya is a character introduced midway through the series, and he loves being surrounded by women. He even describes having one girlfriend at a time as ‘boring’.

He boasts about getting close to girls that love to cook so that he can have a different girl make him lunch every day of the week.

One place bento boxes can be bought pre-made is at train stations. These bentos are called ekiben, and have rather taken on a life and popularity all of their own. There’s even a specific word for people who love ekiben and wish to eat each kind, ekiben-tetsu.

They come in a range of packaging and containing a variety of foods, usually reflecting regional ingedients, seasons and trends.

For example a bento filled with Matsusaka beef (considered on a par with Kobe beef) and presented in a box in the shape of a cow can only be bought from Matsusaka station. You can even get ekiben in the shape of cute characters, such as Hello Kitty.

Some ekiben have a self heating mechanism, a string is pulled to start the process, heating your lunch thoroughly.

Well this is what is supposed to happen, but often in practice the box gets extremely hot while the contents is not properly heated. And the smell can fill the train car, disturbing other travellers, as occurs in episode 2 from Charlotte (pictured above) which is a massive faux-pas in Japan.

The history and culture of ekiben is far more fascinating than you would expect, they are not simply snacks made to eat on trains.

Yotsuiro Biyori chronicles the life of the four men who work at Rokuhoudou, a traditional eatery with modern twists where everyone is made to feel welcome. In the opening episode of Biyori we find the guys who run the restaurant deliberating over what to put on the new spring menu. They have many ideas and don’t want to repeat previous years.

The answer they come up with is a beautiful customisable bento for flower viewing picnics! It contains Japanese sweets in a compartmentalised box and wrapped in spring themed paper. In Isekai Izakaya: Japanese Food from Another World they revitalise the local economy by making eel bentos that are incredibly popular.

Eels in that city were previously thought of as worthless, and they helped a local carpenter use his wooden boxes.

Bento boxes are such an important part of Japanese cuisine, there is even a bento emoji!

In this blog, we will talk about Japan Sinks 2020 on Netflix.