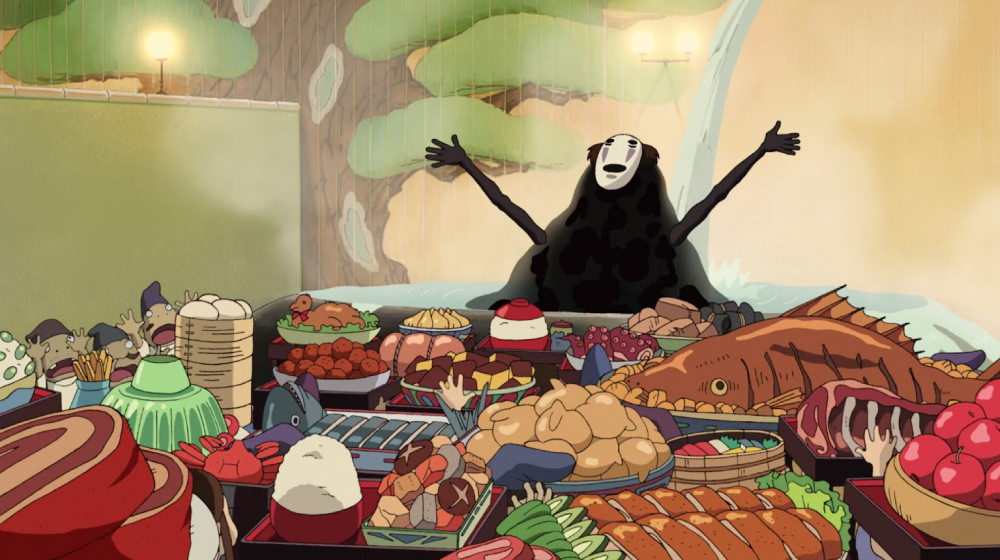 Have you ever felt hungry when watching mouth-watering anime scenes, like when Chihiro's parents (Spirited Away) eat Rou Yuan at a food market? How about joining them with some delicious anime-inspired foods? Read on and find your favorite one!

Invented by Yoshiaki Koma, Pocky quickly became one of the most famous Japanese anime inspired foods. That's why it is number one one our list of anime-inspired foods. These biscuit sticks give you energy to stay up through the night, and they might make you feel excited when biting them. Pocky has various flavors such as cookies, strawberries and cream, matcha green tea, melon, and can be found in most convenience stores.

It's a perfect sharing anime food when you invite your friends over - a bit like Yomi and Kagura in Ga-Rei Zero. Their friendship is marked by the sharing of a box of pocky.

A hamburger might sound like a strange addition to the list, but it's undeniable that burger-lovers exist in both real and anime worlds. Hamburgers appear in many series, including Cowboy Bebop, Dragon Ball GT, Ranma 1/2, and One Piece.

The next food on our list is inspired by Western cuisine: Omurice. It is a warm and tasty dish that can be easily made at home. Fry-cooked rice topped with an omelet and ketchup is all you need!

With Omurice, you don't need to be a professional cook to show off to your beloved ones. Put an apron on and treat your sweetheart tonight like in The Garden of Words.

Another rice food, called Onigiri, is known as a "rice ball" wrapped in seaweed. It's a quick-to-make Japanese anime food that everybody can munch on. Other ways to prepare the perfect Onigiri are to fill it with umeboshi (pickled plums), meat, jelly, or fish. For those who are lazy, Onigiri might be found in Asian convenience stores.

Onigiri appears in many anime series of Pokémon. Another name of Onigiri that foreign anime fans might know is 'sandwich.' However, after some anime fans' feedback, The Pokémon Company changed the name to 'rice balls.'

It would be a shame not to include ramen on our list of  anime-inspired foods. Originating in China, this noodle soup dish quickly became one of Japan's most popular dishes. You can find Ramen in supermarkets or convenience stores which you can pimp up by adding eggs, meat, or whatever toppings you like.

In the Naruto anime series, Ramen shows up as an image of Japanese cuisine, a symbol of friendship, family, and happiness. If there's one anime food that you must try, it's Ramen!

Takoyaki: the perfect street food for seafood fans. It's an easy-peasy anime inspired food to make while enjoying your favorite anime series. The first thing to do is to buy its unique cooking tool. After that, you can make the flour batter containing diced octopus, pickled ginger, and green onions. Takoyaki would be amazing to eat with a sauce blended from shredded vegetables and dried bonito fish shavings.

Korosensei in Assassination Classroom is an excellent example of those who like the spicy taste. He makes Takoyaki with the octopus that Karma killed (as a power play) and makes her spit it out because of the spiciness.

Next, a delicious treat for winners - Katsudon. It's a mix of deep-fried pork cutlets, eggs, and rice. To make it healthier, you can drop in some tomatoes and cabbage.

In Yuri!!! on Ice, Yuuri Katsuki is allowed to eat Katsudon whenever he wins. But he always breaks this rule. Will you do that too?

Let's end the list with a street food called Yaki Dango. During the weird and epic adventure of Mugen, Jin, and Fuu in Samurai Champloo, they stopped and spent time eating Yaki Dango by the road. We're sure that you can't resist running out and getting some Dango after watching that appetizing scene.

Yaki Dango are little Japanese sweets made from mochiko (rice flour). If you're in Japan or any shopping center, you can easily find it. For those who want to make it at home, here are the instructions.