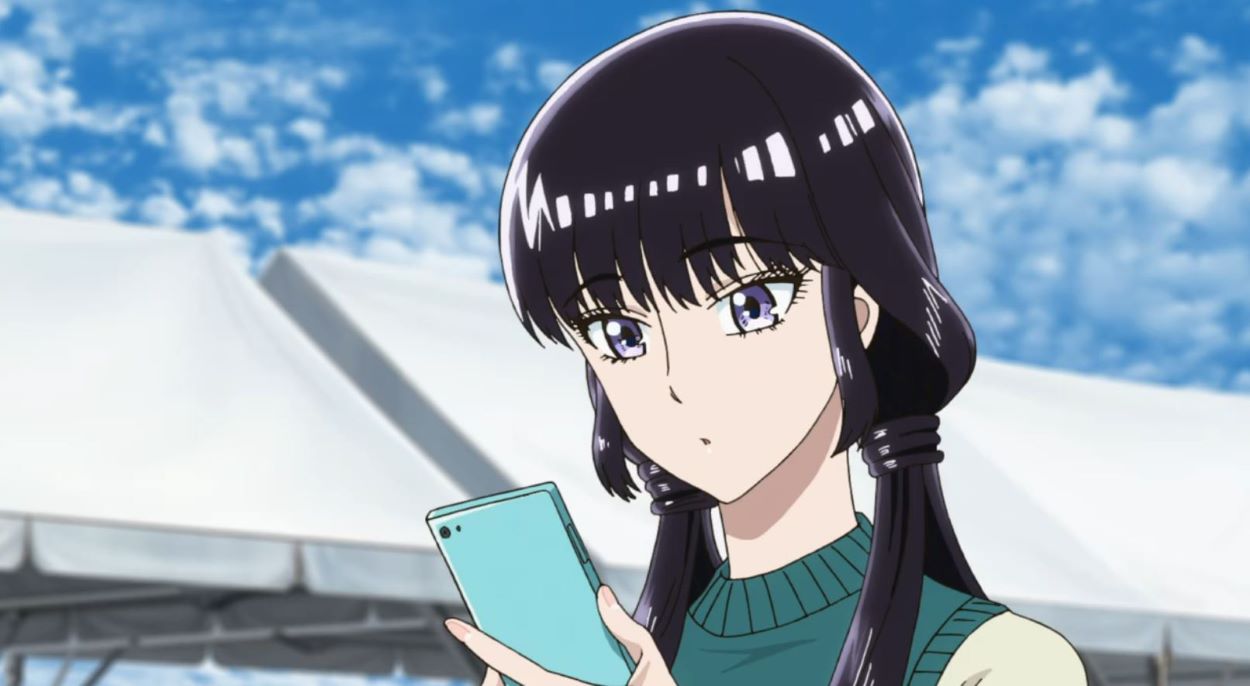 Anime doesn’t have to play by the rules of reality when it comes to eyes and eye color. Designers can really go to town just because they love a certain look, or they can be used to betray certain personality types. Eyes are often big to make the character cute, and can have exaggerated catchlights.

Probably the most noticeable feature of an eye, some eye colors can have certain meanings. Red eyes can depict a villain, or used a lot with magical characters that are connected with fire.

Yokai often also have red eyes (Oodanna, the Master of the Inn in Kakuriyo -Bed and Breakfast for Spirits-, pictured is a good example of this). Humans in entirely non-magical anime can also have interestingly colored eyes, purple being one that occurs a lot.

This can indicate a mysterious or unusual person, but can just be part of the design and color palette, akin to exaggerated hair color.

Brown, grey or even black eyes are the most common as dark eye shades are the most prevalent in Japan, so characters with these are presumed to be ‘normal’, although sometimes this is simply a disguise! Foreigners are basically always depicted as blond haired and blue eyed.

Foxes have a big place in Japanese folklore. They are believed to have the ability to be able to take on a human form, and are cunning tricksters. Characters with yellow eyes can be thought of as fox-like, and thus cunning, clever, mysterious, and probably not to be trusted.

Japan has a very homogeneous population, so often minor differences in appearance are really noticeable. Bullying due to a person’s looks is a worldwide problem, but in Japan this can be very much exaggerated. This phenomenon is mentioned in several anime.

In Fruits Basket, the members of the zodiac often have hair and eyes that reflect the animal the character transforms into. Many of them hate the way they stand out, and can get into trouble, people assuming their hair is dyed.

Kisa, the tiger (pictured), has orange hair and eyes, and has been terribly bullied at school, so much so that she stopped speaking all together.

Sanpaku means ‘three whites’ and refers to when part of the sclera (the whites of the eye) is visible either above or below the iris. Marilyn Monroe, Billie Eilish and President John F. Kennedy are famous examples of people with sanpaku.

In Asia there is a medical practice known as ‘face reading’, and sanpaku is meant to show a whole range of ills. If the sclera is visible below the iris (yin sanpaku), this is said to show physical imbalance, and implying an alcoholic or a drug addict.

Yang sanpaku, where the sclera can be seen above the iris shows a mental imbalance, and this a tendency to violence, rage and even psychosis.

These beliefs have mostly been debunked by medical science, but people with sanpaku eyes are still often seen as scary, rebellious or a troublemaker. Ryuuji from Toradora! suffers from this, with all his classmates assuming he’s a delinquent, some even avoiding him out of fear.

For the pro-wrestling show he uses eyeliner to make his eyes even more pronounced, but gets told by Taiga to remove it as it’s terrifying.

Eye makeup is a really important part of being a gyaru, and some use circle lenses. These are decorative (not corrective) contact lenses that make the iris look bigger, and can also change the eye color, as color and fun are the main point of being a gyaru.

There are clever ways to use makeup to make your iris stand out even without using a circle lens. For more on gyaru please see https://www.ecchiart.com/post/what-is-a-gyaru.

Yandere is an anime character archetype (a bit like tsundere), derived from the terms yanderu meaning insane and deredere meaning loving. So the yandere is driven to (often violent) insanity from their obsessive love.

This can be directed at the object of their affection or anyone they perceive to be in their way. When yandere’s snap, their appearance can change, especially their eyes.

They tend to go darker, or even black, and look almost dead. Katsura is seen here in School Days when she is pushed to yandere mode.

Eyes are the window to the soul, and can show a lot about the character beneath, even in fiction!

Anime characters are often introduced with their blood type...