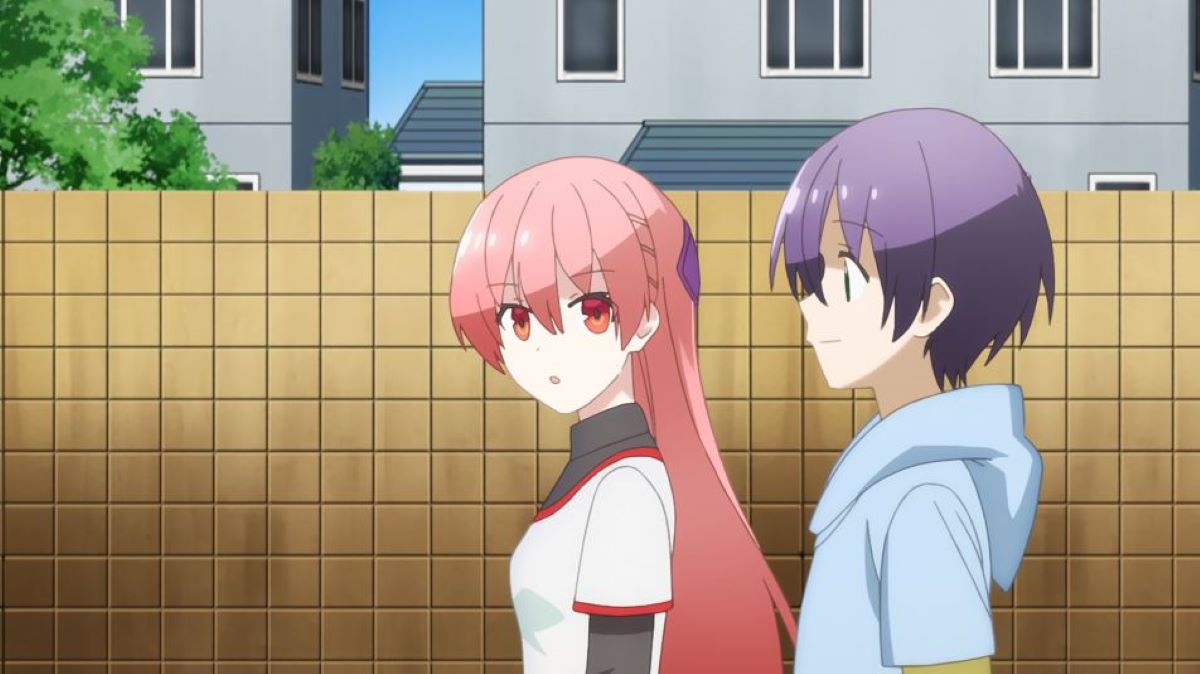 Hair in anime is often unusual, in highly exaggerated colors and over the top styles. It can be a visual short-hand for various personalities, archetypes or social standing. It can also defy all logic and gravity! Here’s a few styles to look for.

Characters often sport bright hair colors, sometimes even in seemingly realistic anime. Occasionally explanations are given, such as in The Disastrous Life of Saiki. K, as Saiki has changed the DNA of the population to have brighter hair with his psychic powers so people don’t notice his own lurid pink shade as unusual.

In Quintessential Quintuplets all the girls have a different hair color and style (four shown above), which are obviously dyed, but even their natural color is revealed to be light pink. Specific colors can allude to certain things. Silver or grey hair can denote purity or naivety.

Blond often signifies a rebel, a gyaru, or a foreigner. Practically all characters that are half-Japanese are styled with blond hair.

Sometimes called idiot hair, it is a single hair strand sticking out from the head, often the top but sometimes from the side. These are usually employed in comedy anime, and can be expressive, moving with the emotions of the character.

Red Blood Cell AE3803 in Cells at Work has a small one that sticks out under her hat, setting her appearance apart from the other red blood cells. She is also more scattered-brain and gets lost a lot!

Pretty boy characters are often styled with their hair long, adding to their alluring and feminine qualities. Ayame Sohma pictured here is famous for being camp and over-the-top, running a shop that makes custom-made costumes, so having hair that makes him stand out adds to his persona.

As his Zodiac form is a pale snake, his long silver hair is also visual symmetry.

Hime means princess, and this is a regal style of hair based on styles worn at court in the Heian Period. The hair is straight, black and long, with sidelocks trimmed between the check and shoulder and bangs cut only slightly above the eyes.

Girls of rich families often have this style, or those with delusions of being a princess or who wish to seem well-to-do.

Twintails are a big force in anime, and even popular enough for their own light novel series and anime, Gonna be a Twin-Tail!! Two ponytails on either side of the head, aesthetically pleasing due to the symmetry they are an often used hairstyle, with a range of characters wearing them and in different ways.

They can use the whole or only part of the hair, and can be worn in a variety of lengths, extremely short all the way to floor length. They have been associated with tsunderes. In the grading system for Absolute Territory the elusive grade S can only be achieved with thigh high socks paired with twintails and a tsundere personality, but of course they are not exclusively worn by tsunderes.

Ojou is a formal term that means young lady, and usually refers to a wealthy high-class girl. To find this sort of girl easily, they often have two ringlets on each side of their head. Popular with gothic lolitta and girls wishing to style themselves as wealthy.

Minamikujou Ayame from Silver Spoon (pictured) is from a normal family but sports ringlets and speaks as if she is a member of the elite, generally confusing everyone.

In Punchline, several characters can Uberfy, activating superhuman abilities. When they do, their hair glows brightly. Magical girl Strange Juice has naturally pink hair, which glows orange when she uses her powers for her vigilante justice campaign. Variations of this theme can include hair changing color or growing when the character activates their powers.

This refers to unrealistically long hair. Many characters have longer than customary hair in anime, with hair to the waist not unusual. Some characters take this even further, with hair falling almost to the ground.

It can often be associated with rich girls, or girls with a lot of power. The impracticalities of having such long hair seem to not come up too much!

Japan doesn’t particularly celebrate Halloween, but here is some appropriate anime to enjoy over the spooky season