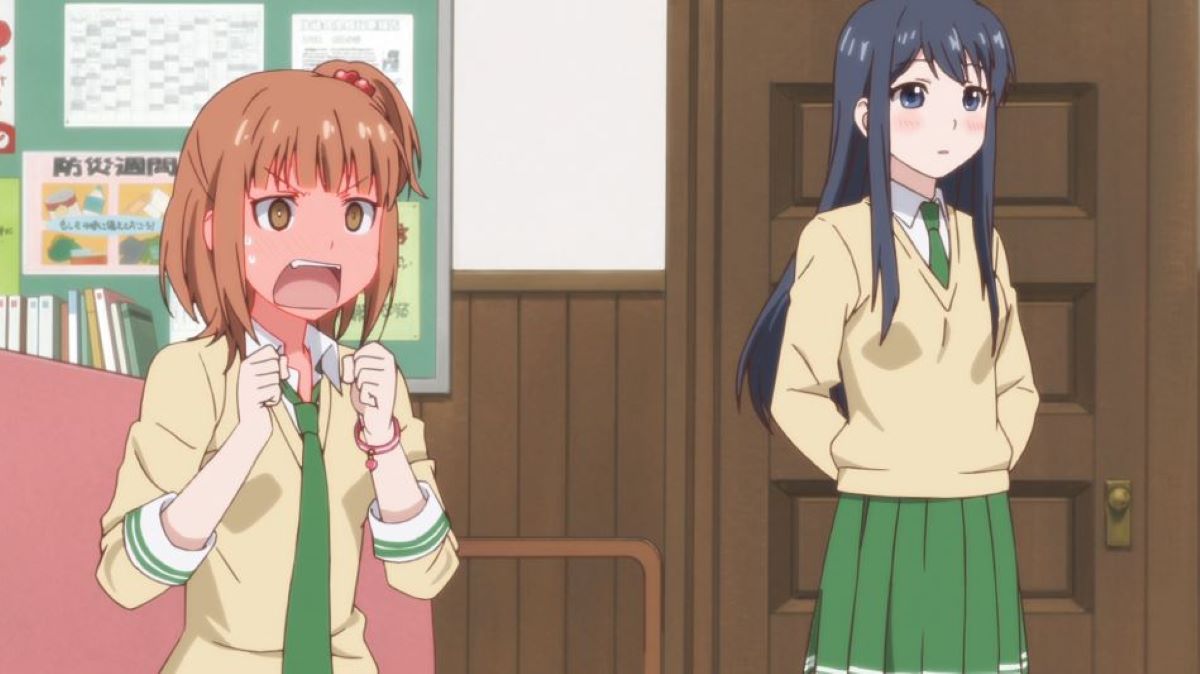 Anime can express the feelings and emotions of characters exceptionally well. Great artists can portray their feelings in one look without them needing to say a word in incredibly realistic ways. Anime doesn’t shy away from complex subjects and the emotions that come with such matters.

But along with the life-like expressions come a whole range of cartoonish tropes that all okatus need to know the meaning of!â

A visual and cartoony way to portray anger, giving it an amusing slant and often breaking the tension a bit. Really useful if the character is facing away or is in the distance, as the popping vein can be added just above the head, and the audience gets the full picture even without even needing to see the face.

Some characters such as Kurusu in Monster Musume: Everyday Life with Monster Girls seem to permanently have a blank look on their face! In poor Kurusu’s case, it’s because he is constantly put into compromising positions with the monster girls.

It can be used for confusion or shock and is useful when working in a black and white format such as manga.

A childish and derogatory gesture that is generally used as a taunt. Akanbe is the action of pulling the eyelid down so the red underside is exposed and is usually partnered with the sticking out of the tongue. Often akin to a child putting their thumb to their nose and wiggling the fingers, adults can also use akanbe to denote sarcasm.

The term is thought to come from a corruption of the word meaning ‘red eye’, as the action is only complete if the eye’s red underside is showing!

Used to denote discomfort or general squealing (for any reason, including happiness). Good for a fangirl moment, Kashima provokes this reaction a lot in Monthly Girls’ Nozaki-kun; the girls that surround her often have arrow eyes.

It comes up a lot in ecchi, especially if the characters are of an innocent nature.

Blushing is a relatively standard facial expression, but anime can really take it up a notch. Some blushes are realistic, drawn with a few red lines, but many characters, when embarrassed, splash an incredibly worrying shade of red, even to the point where it fills the whole face! Other characters also seem to have a permanently flushed face, often adding to their moe appeal.

Used a lot with tsunderes, with them often desperately trying to hide their inner emotions spilling out as color on their face.

A great visual shorthand, especially in a cramped environment such as manga. The character is overworked, confused, dizzy, or even slightly drunk. It may mean they are about to collapse, or they simply can’t cope with some information they have just heard.

A bit like a blush, but the blue fills the upper half of the face. It is often accompanied by an extreme eyebrow angle, downward lines, and blank eyes. It can denote sickness, dread, or extreme surprise.

Here, it shows how Manabe reacts to needing to keep his dirty thoughts in check around Kotoura after realizing she is a psychic and can read minds in Kotoura-san. He obviously thinks it is an arduous task!

This is a special one, as it’s less a facial expression and more a full-body response to extreme shock or violence. Usually played for laughs, the ghost resembles the character’s features and starts to leave the body through the mouth as they give up and slowly expire.

This often occurs after an amusing injury, but in true anime style, the receiver of the wound will usually recover fairly quickly. Some characters are prone to being beaten and so give up the ghost quite regularly.

It can be used in a figurative sense too, when shocking news has made the character merely feel like they could die.

Sadly this is not an exhaustive list, as anime is simply full of tropes!

Isekai is an enormously popular and variety genre, but what exactly is it and where did it come from?